Hey guys! I’ve read a lot of books lately but I haven’t had time to write good, thoughtful reviews of them, so I decided to put together a little batch of Mini Reviews!

The first book up is The Perks of Being a Wallflower by Stephen Chbosky. 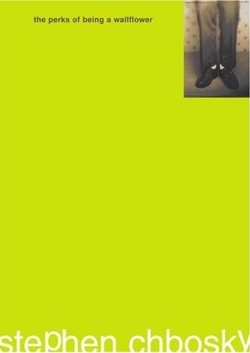 “So, this is my life. And I want you to know that I am both happy and sad and I’m still trying to figure out how that could be.”

This story follows Charlie, a freshman who’s pretty clueless. It’s clear from the beginning he has a mental problem. I thought he was a very sweet character, and he wasn’t the reason that I gave this book 2.5 stars. Charlie becomes friends with a girl named Sam and her twin brother //. He starts to fall in love with Sam, but the feelings are unrequited. Sam has a boyfriend, and isn’t interested in becoming more than friends with Charlie.

The main problem with the book was how angsty it was. Every single problem a teenager might deal with is mentioned. Every. Single. Fucking. Problem. Relationship abuse, mental problems, incest, drugs, drinking, sex… It was like the author didn’t know which to pick and choose, so he used everything.

I didn’t find it relatable, even with all these teen issues. Tons of people love this book, so I’m definitley in a minority here. It just wasn’t for me.

I’m obsessed with books about cruise ships. Ever since I watched Titanic when I was eleven, I was obsessed. Especially if it ends in a shipwreck. The cover of Sweet grabbed me right away, and the description made it sound awesome, too. This was a fun book, but it was a definitely cliche.

The main character in this book is Laurel, who’s friend Vivi brings her along on the Solu: Cruise to Lose. Solu is a revolutionary weight loss product that is said to have dramatic slimming effects in days. To many, it sounds too good to be true. While Vivi is excited to lose weight, Laurel is very confident in herself and doesn’t think it’s necessary to take Solu with her food every night like the others on the ship. The second point of view in this book is Tom Forelli, a celebrity/child star who wants to lose his nickname “Baby Tom-Tom,” from a former TV show he was a part of. He is on the cruise ship for publicity, and really doesn’t have any interest in taking Solu, either. Soon, they find out that their very lucky. People on the ship have become addicted, and the cruise has become a death trap.

I think it got a little cliche and cringey in parts, especially when relating to Tom and Laurel as a couple. Laurel has been a fan of Tom for a while and he’s her celebrity crush. I think the celebrity/common person trope is kind of annoying, so that’s my criticism for this book.
The ending was one of my favorite parts about it. It will leave you thinking, and it would be interesting to see a sequel, although I do like thinking of what happens next myself.

The Last Boy and Girl in the World by Siobhan Vivian

Cover Rating: 10/10 Just like with Sweet, I think this cover is absolutley stunning!

This book is about a town sliding underwater. All citizens are told to leave as soon as possible because the town is flooding and is going to be extremely dangerous to live in. Keeley Hewitt is devastated about moving away from her friends. Aberdeen is her home, it’s where she grew up and it’s all she knows. Especially now when Jesse, the guy who she’s been in love with since sixth grade, is finally making a move on her. So she and her friends decide to go out with a bang: throwing slip-and-slide parties and having secret proms. But what happens when Keeley realizes that she’s made a mistake, and maybe the boy she’s loved forever isn’t the one she’s meant to be with? All she knows is she has one last shot at finding out.

I loved this book so much. Keeley was such a relatable, honest character and I could understand her actions and feelings. I really, really liked her and her naration. I also was in love with the setting. A town that’s sinking? One last shot at the boy she’s loved forever? Sign me up! The Last Boy and Girl in the World really made me think about what I would do if I were in Keeley’s situation and I honestly think I would’ve made the same choices and the same mistakes. This is not only a book about love, but also one about friendship, and the romance didn’t consume the whole story.

I seriously recommend this book.

I’ll definitley be doing another one of these soon! What did you guys think? Let me know below! Also, who’s excited for The Crown tomorrow?!?